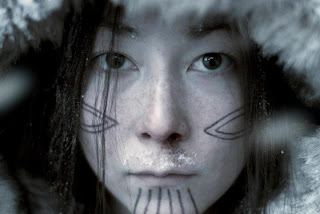 Today marks the beginning of the Toronto International Film Festival and I have TWO films playing in it that you won't want to miss!  I'll devote a post to each and share my make-up process!

FROST, directed by the extremely talented Jeremy Ball, plays in Short Cuts Canada #4 on both Tuesday September 11 @ 6:30 PM and Wednesday September 12 @ 4:45 PM.  Rumour has it that the Tuesday is sold out, so rush line it or snag some tickets for Wednesday!

Frost was a particularly challenging film as we shot it entirely in studio and predominately on a green screen.  I was also dealing with almost zero regular make-up.  By that I mean there was no beauty make-up, it was entirely breakdown make-ups, tattooing and exposure effects.
Our inspiration for the make-up was traditional Inuit style tattooing on face and hands.  This type of tattooing was traditionally done by a string of sinew thread and a needle.  The needle & thread would be dipped in pigment and then inserted under the skin and drawn through.  Not an awesome process, that's for sure, but it certainly represented strength (among many other things) in the women who received them.

Both of the female characters in FROST got the tattoo treatment, with the mother being more heavily tattooed.  My challenge was making it look real, natural, imperfect and under the skin, not sitting on top like many fake tattoos look.  No needle and sinew here!  I used a ballpoint pen transfer and Illustrator palettes.

The father got mostly exposure effects and a nice ragged scar across his face.  I wanted him to look weathered and worn, with wind burn across his nose and cheeks.  3rd Degree two part silicone was used for his scar and Illustrator palettes for his breakdown and colouring.

The wardrobe department and I went through a lot of snow and ice products. I used various sizes of Zice crystals and polymer snow.  It's fun stuff to play with! When mixed or misted with water, they expand to create a frost, ice or snow effect.  A little bit of Fleet Street's blood products made an appearance too, but I don't want to post any spoilers!

I hope some of you get a chance to see this film at TIFF.  It's getting incredible reviews!  I was able to see it at a cast & crew screening and maybe I'm being a bit dramatic, but I got a little teary at the end.  So much was shot on a green screen that I had no idea what to expect from the final outcome, and it blew me away!  We had an incredible crew, including my lovely assistant Monik Walmsley, and an exceptionally talented cast of Emily Piggford, Oscar Hsu, and Lara Daans.