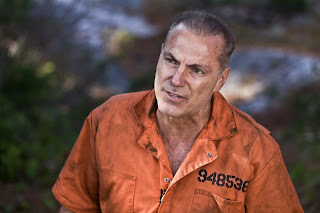 As if one film in TIFF wasn't cool enough, how about one more?!

We spent a week in Georgian Bay shooting this comedy short, starring The Soprano's Al Sapienza, Falling Skies' Mpho Koaho and comedian Pat Thornton, along with a great stunt team!  With a cast of all men, the make-up needs weren't heavy.
Much like with FROST, realism was key.  The two lead characters were convicts on the run, looking Hollywood-perfect would be very out of place.  A healthy dose of faux sweat and dirt was my main concern, along with keeping my actors from continuity issues like sunburns and bug bites.  For the aspiring MUAs out there, when on outdoor shoots, keep this is mind!  You don't want to have to correct sunburns with make-up half way through the shoot, nor swollen bug bites on visible skin.  Not to mention how uncomfortable they can be for the actor.  I hose my actors down in sunscreen and bug repellant!
﻿﻿﻿﻿﻿ 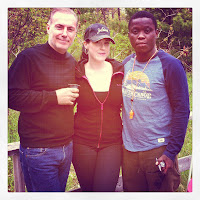 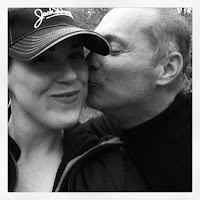 With Al's character, I got to sneak in a couple prison inspired tattoos.  Since both Al and his character are Italian to the max, I went with the words "AVERE FORZA" on his knuckles.  In Italian this means to have strength or force.  I also tossed in a simple but common prison tattoo of 5 dots on the webbed part of the hand between the thumb and the first finger.  One dot surrounded by four dots symbolizes a prisoner within prison walls.

I used a lot of Ben Nye dirt powders, mainly the ash, plains dust and carbon powders.  But if you need your dirt to really stay put, try Skin Illutrator palette in Dark Fleshtone.  I love using this on hands and under nails, it will survive hand washing usually with minimal touchups!  For sweat, I most often just use a simple mixture of water and glycerin in a spritzer bottle.

It was a great shoot with lots of memorable visitors to set...like a hungry black bear that visited our island location every day, whether people were around or not!  And plenty of snakes, big and small.  It's amazing we all made it out to tell the tale...

I haven't seen the finished product yet, but odds are good that I'll be at the Thursday premiere! Say hi if you see me!
Posted by Kat Von Pire at 6:27 PM