He is responsible for giving me years and years of nightmares as a child, thanks to his work on The Exorcist.  I was introduced to this movie far far too young, and it left a definite lasting mark.  Even today, at nearly 29, I still get chills.


His aging techniques turned the beloved vampire Barnabas Collins, played by actor Jonathan Frid in TV's Dark Shadows, into a 175 year old man.  For his work on The Hunger, also involving the extreme progressive aging of David Bowie's character, he received a Saturn Award nomination. 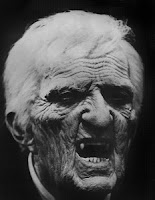 His work on Amadeus garnered him both a BAFTA and an Oscar.  And in 2011 he was honoured with a Lifetime Achievement Oscar to celebrate his 60+ year career in film, making him the first make-up artist to receive one.

Think you haven't seen his work?  Think again.  His list of credits is lengthy, including The Godfather I & II, Taxi Driver, Altered States, Scanners, Death Becomes Her, and many many more.  He's also the man responsible for some of the top make-up effects artists currently working in the industry.  Among his former students include Rick Baker (Hellboy, Men in Black series), Richard Taylor (The Lord of the Rings), Greg Cannom (Watchmen, The Curious Case of Benjamin Button), Alec Gillis (Aliens), Ve Neill (The Hunger Games, Edward Scissorhands), Kazuhiro Tsuji (The Ring, Total Recall) and Mike Elizalde (Fantastic Four, Lady in the Water).

For a really indepth retrospective on Dick's career, incredible photos and make-up process descriptions, hope on over to Doug Drexler's blog here:
http://drexfiles.wordpress.com/2009/06/21/dick-smith-retrospect/

Doug is a make-up artist and visual effects artist that began his career learning under Dick Smith on the set of The Hunger!  His blog post shows some truly amazing transformations and highlights some of the techniques Dick pioneered.

And of course, be sure to visit Dick Smith's official website to learn more about the man behind the legend and his make-up effects training courses.  dicksmithmake-up.com
Posted by Kat Von Pire at 5:13 PM