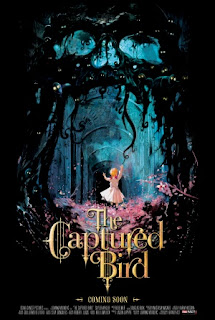 The Captured Bird, a short dark fable written and directed by Jovanka Vuckovic, produced by Jason Lapeyre and executive produced by Guillermo del Toro, is having it's world premiere this weekend in Toronto at the CFC Worldwide Short Film Festival.  Part of The Night Shift program, a collection of dark & horror themed short films, Saturday June 9 beginning at 11:30pm at the Bloor Hot Docs Cinema.

I had the amazing opportunity to lend my make-up abilities to this film in late May of last year.  The key artist, Melissa Zimmerman, took care of our extremely talented 6 year old lead, Skyler Wexler, while I handled the background cast.  The animatronic creature, which anyone who's followed the making of this film is dying to see on screen, was made by Paul Jones and his team.


The list of incredible talent that worked on this film is lengthy, so without this post turning into one big adventure in name dropping, I implore you to check out the film's official website: TheCapturedBird.com for info on the filmmakers.  Be sure to check out the blog for a peek into the making of this film, the 3 days of shooting in a haunted mansion, and more info on where you can see it!

There was a sneak peek at the recent Cannes Film Festival for industry and press, so the CFC Worldwide Short Film Festival marks it's first official public debut.  The Night Shift program on June 9th runs from 11:30pm to about 4am, but rumour has it The Captured Bird is the 5th film in the sequence, so if you need your beauty sleep you can still catch it without faring too poorly on Sunday morning!  I sadly won't be able to make it due to Niagara ComiCon and beginning production on a film.  So please go on my behalf and let me know how awesome it turned out!  Visit WorldwideShortFilmFest.com for scheduling and tickets.
Posted by Kat Von Pire at 1:05 PM